Joining the other opposition parties who are demanding Sadhvi Niranjan Jyoti’s sacking as Union Minister for her hate speech, Rahul Gandhi and all other opposition leader covered their mouths with black cloth demonstrating they were not allowed to speak in the House of Parliament.
Covering mouth? What an Idea sir ji ! But came a little late, I suppose. 😀 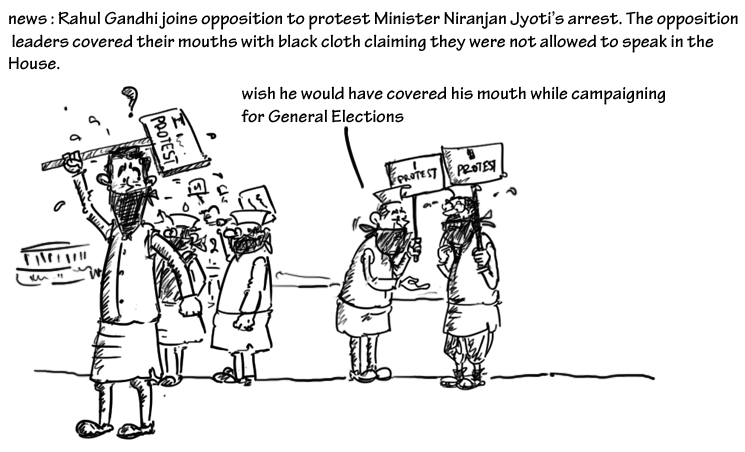 Addressing a rally in Maharashtra , Rahul Gandhi took a dig at Gujarat’s model of development by saying businessmen like Adani get land in Gujarat for Re1, almost the price at which we buy ‘toffee’.
“Toffee ” ??  Out of everything else??
Is that why the opposition still considers him Mumma’s boy ??
So we know where its coming from ??  😀 😀 😀

Rahul Gandhi’s very first official interview since joining politics and that too on ‘Frankly Speaking with Arnab Goswami’ has drawn a queue of controversies.Some say he should have apologized for the 1984 Sikh riots and some say how he could accuse Modi of 2002 Gujarat riots when the Supreme Court has declared him clean.
However,the 1 hour 20 mins video of this interview has seen Rahul Gandhi dodging many direct questions asked by interviewing journalist Arnab Goswami . To, all most, all questions asked by Arnab ,Rahul would talk about youth and women empowerment and the youth joining politics. At times,the answers sounded totally out of the context and absurd.Like, when asked about his views on Narendra Modi , Rahul would talk about youth and women empowerment.  😀
This interview has made Rahul Gandhi as smart as Rahul Mahajan looks on TV screen,forsure!
And here is a perfect take on Rahul’s interview with Arnab Goswami by renowned TV host Cyrus Brocha

[polldaddy poll=6721460]
Dear Visitors,I request you to please spare a few seconds more to give your very valuable feedback on how am I doing.

AAP , the new political party in the nation and Arvind Kejriwal , the activist turned  politician has given Sheila Dikshit and Congress great defeat in Delhi Assembly Polls and has come out as a strong contender for both the Congress and BJP. Interestingly, out of the 70 seats , AAP , the first timer in politics, has won 28 seats. BJP has managed 32 seats falling 4 short of getting the throne of Delhi. Congress has failed to manage even two figures.
Sheila Dikshit , has already resigned from the Chief Minister’s post.Pre-elections,she was heard claiming 2013 Delhi Assembly Elections was as usual a tough fight between Congress and BJP and did not consider  Arvind Kejriwal and his AAP party any threat. Even BJP gave similar but balanced statements about AAP. However, the acceptance of AAP in Delhi shows the impact they have been able to create. The impact of the India Against Corruption Movement started by Anna Hazare and the decision of Arvind Kejriwal to enter into politics to curb corruption has got a warm welcome from the capital of the country.
Tougher task ahead for Arvind Kejriwal of keeping the faith of his supporters intact and for good.

The BJP, on the other hand , won 3 states – Rajasthan,Madhya Pradesh and Chattisgarh but the impact of NaMo wind could not stop the broom-man Arvind Kejriwal from being a spoiler for BJP.Although they got 32 seats in Delhi, they are 4 short of making a govt there.  But so far,the trend for 2014 General Elections seem to be getting clearer.

Rahul Gandhi has been regularly making news these days with his statements at different rallies. To add another feather to his list of remarkable statements , he recalled while campaigning for 2009 elections in Bundelkhand,he got stomach bugs due to drinking village water and was bitten by about 25000 mosquitoes. BTW, is there any gadget to count the number of mosquitoes attacking us ? 😀