Pak’s Nawaz Sharif govt has run two special trains from Karachi and Hyderabad to transport people to the JuD rally where the 26/11 mastermind and one of the world’s most wanted terrorist , Hafiz Saeed, openly warned India once again that India will face consequences if Kashmir is not ‘freed’. He asked the Sharif Govt to support Kashmiris in all possible way if India does not listen through dialogues.
While Paksitan says it wants dialogues with India on Kashmir issue , it has always maintained that it will not distance itself from the ‘separatists’ of Kashmir. Terrorists like Hafiz Saeed roam free in Pak  while they are accused of 26/11 terror attacks in Mumbai. Pakistan never agreed Kasab was a Pakistani while numerous proofs were produced in front. While Pakistan has always maintained double-standards they, on the contrary, claim India maintains double standards. Bottomline – Nawaz does not seem ‘Sharif'(decent) anymore. 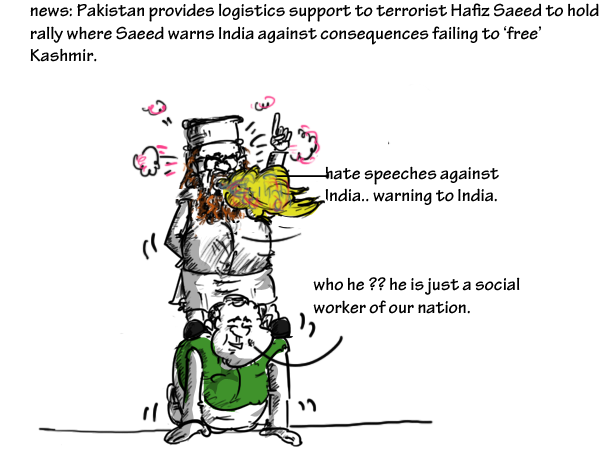 As per the Minister of External Affairs,Salman Khurshid, the Indian Prime Minister,Dr Manmohan Singh had given a very straight forward and crisp answer to Pakistani Prime Minister,Nawaz Sharif on the Kashmir issue when both the PMs had met in New York alongside UN General Assembly. According to Khurshid,Dr Singh declared he did not become the PM of India to re-draw boundaries,to Nawaz Sharif.
Guess this statement  was limited to re-drawing International Boundaries only because it is the same  Dr Singh led UPA Govt which has recently re-drawn boundaries of a state once called Andhra Pradesh and given birth to new states of Telangana and Seemandhra attracting criticisms and praises,simultaneously.
Here are some more cartoons on Indo-Pak LoC dispute

In a  fresh incident, Pakistan army has opened unprovoked fire and is continuing in the Bhimbir Gali sector in J&K’s Rajouri district. So far, in 2013, Pakistan troops have violated ceasefire along the LOC 130 times,the highest in past 8 years.

Find More Cartoons on Indo-Pak border dispute
The ideal reason why such unprovoked firing is done is to help intruders cross LOC while diverting minds of Indian army on the firing zone. Although,Pakistan army has always denied such support of intrusions.

…. The argument continues since decades.

The Media is busy showing what the government has to say on the killing of 5 Indian soldiers by Pakistan army intruding inside Indian territory. The opposition has warned the govt not to talk to Pakistan PM anymore (which was getting scheduled).Pakistan army denied any such attack. Governments both Central and State, declared compensations for the families of jawans who lost their lives in the assault.
This is not the first time this has happened in the recent past and as the Media declares ‘ the Enraged India’ , people like us, will discuss this for a week at the most and then get back to our day to day lives. Government will as usual condemn the act of the loving  neighbour and stop talking to them for a year at the most. Media will highlight the news till they have another Breaking News to divert minds. (anyways , not their fault,they are as helpless as we are).
‘Enraged India’ will get back to normal life as even we have dependents to feed ! The ones whom we expect to answer back our neighbours, hardly answer us,can we expect them to answer Pakistan’s repeated assault ?

After 5 Indian soldiers were killed and one wounded by Pakistan army which entered in Indian territory, Congress President Sonia Gandhi has said  “India cannot be cowed down by such blatant acts of deceit” and urged the government to “take appropriate action.”
As usual , Pakistan army denied any such attack and to add on Defence Minister , A.K.Antony, in the Parliament said “The ambush was carried out by approximately 20 heavily armed terrorists along with persons dressed in Pakistan Army uniforms,” giving all good reasons to Pakistan to escape saying it may be some terrorist group in Pakistan army’s outfit !!

Pakistani soldiers entered Indian territory in the Poonch area of Jammu and Kashmir and killed five Indian soldiers while a sixth soldier hid behind a bush and avoided the attack.