Sadhvi Niranjan Jyoti, junior minister for food processing, has attracted opposition and media attraction after her hate and abusive speech against Muslims and Christians in a rally in Delhi. The opposition demanded her immediate removal. Although, she apologized in the parliament stating she had no intention to hurt anyone’s sentiments, PM Modi warned all the BJP leaders not to address the nation.
While,PM Modi is busy enhancing his image as a pro-development PM of India from pro-Hindu CM of Gujarat, controversies like this are surely playing killjoy in his efforts. 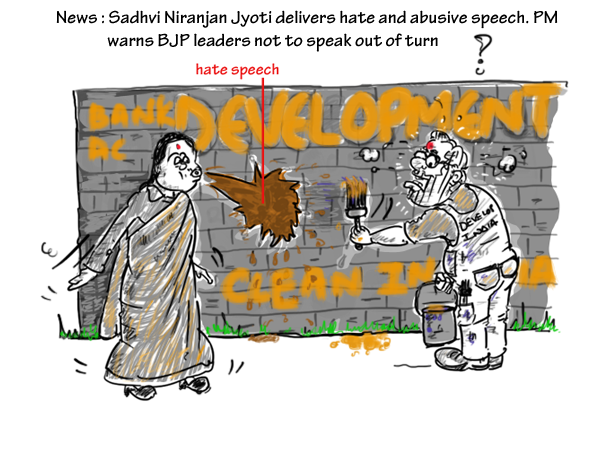 Majlis-e-Ittehadul Muslimeen (MIM)  MLA ,Akbaruddin Owaisi who has been in news for his ‘hate speech’made against hindus,returned from London to Hyderabad,avoided surrendering to police on grounds of  ill-health.Hyderabad Police which has been criticized for going slow on the issue went to Akbaruddin’s residence to question him on his alleged hate speech.Meanwhile,he applied for stay on his arrest in the Andhra Pradesh High Court.
Urban India may not be taking these hate speeches made by political leaders against other religion,caste and state too seriously but is it the same with rural India where the literacy level is comparatively very low. It is not only easy to play vote bank politics by giving hate-speeches against specific communities and groups but also readily possible to provoke violence between groups.
Be it Raj Thackeray making speeches against Biharis or Akbaruddin Owaisi making speeches against Hindus,is their sole motive  not vote-bank politics? With law in one pocket and few goons in other,there are several political leaders throughout the country who dare the unity of India and yet roam about freely,unquestioned and never accounted for.