Former Union Minister Sriprakash Jaiswal of congress who lost to MM Joshi of BJP this General Elections, said Congress will take to the streets if NDA govt does not bring down inflation in next 3 months as promised in BJP’s manifesto.
Did the BJP really commit to bring down inflation in 3 months which the Congress led UPA govt could not bring down throughout its second tenure , is a matter of inspection.  However,is the Congress left to do anything else other than taking to the streets ? The party has reduced to 44 seats falling short of even standing as a main opposition party.
“….Ab Congress waale kya karenge ???? …… arey protest karenge .. protest karenge … protest karenge ”      😀    😉

By the way, Digvijaya Singh of Congress who was always heard accusing and addressing Modi with disrespect pre-election results has changed the way he addresses Modi now .   😉  Looks like Digvijaya ji has got the message loud . Quite loud!!!   😀

And Nitish Kumar of JD(u) who left the alliance of NDA,last year,and was heard criticizing Modi has resigned as the CM of Bihar. This step has been taken because few MLAs of his party decided to join BJP after a shameful loss of seats in the state. To save the party from splitting Nitish Kumar has decided to sacrifice his seat. 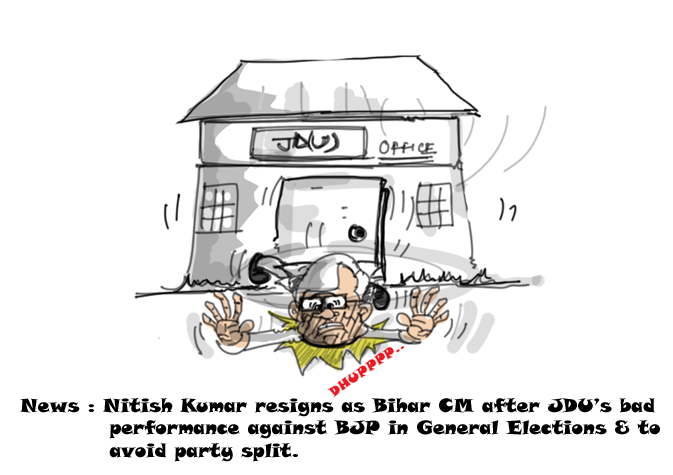 Outspoken Congressman,Digvijaya Singh,popular for his controversial remarks specially on BJP’s PM candidate,Narendra Modi,has revealed his relationship with Rajya Sabha TV anchor,Amrita Rai.In a tweet,he not only accepted his relationship with Amrita Rai but also stated that she and her husband have signed a mutual consent divorce paper.
Ironically enough, he condemned encroachment in their private life although he has been bluntly commenting against Narendra Modi for not disclosing his marital status for long time.
After all,there should be no issue in disclosing marital status.Its the relationship status which should not be disclosed.   😀   😀   😀

Digvijaya Singh , senior leader of Congress,popular for his irrelevant political statement  in the media , is back again.He claimed in an interview that Rajnath Singh the current President of the major opposition party,BJP, played a second fiddle to the  then Party President , Nitin Gadkiri and then replaced him and now he is being the 2nd man to Modi and if BJP wins,he will replace Modi,as well.
Well, that is all an assumption from Mr.Singh . What about his aspirations ? After all, even he has been a politician since ages.Even he may be thinking of being an important man to his party, as second fiddle to the top-man of his party ! Who knows ?  😀

Digvijaya Singh,senior leader of Congress , who is more popular for contradicting and counter-attacking Team Anna,Baba Ramdev and almost anyone and everyone who talks against the UPA government, repeatedly criticized Mamata Banerjee on the camera for not supporting UPA in Presidential Poll. In his interview to a news channel, he declared, how disappointed and frustrated Congress had become to take ‘tantrums’ of Mamata Banerjee. Sensing the emergence of the situation , the Congress party, in a media release declared that Digvijaya Singh was not officially authorized to talk on behalf of the Congress Party in the media. Realizing that TMC supremo is still a reliable ally compared to the SP which can change stands at any instance, the Congress must have thought its better not to give wrong signals to  Mamata Banerjee.

Surely,Digvijaya Singh must have lost his face after the statement released from his party ! 🙁

Digvijaya Singh,the senior Congress Leader, has compared Gujarat Chief Minister,Narendra Modi to the demon king Ravana ! Ravana though had a prospering kingdom made of gold but he was equally proud of his achievements which brought him his end.Showing sympathy towards the forced exit of Sanjay Joshi  from BJP due to Modi’s pressure,Digvijaya said Mr Modi should shun ego and pride.

Popular for counter-blaming anyone and everyone who dares to accuse the UPA government, Digvijaya Singh,the Congress Leader, asked Baba Ramdev to reveal his Black Money before initiating any campaign related to the same.