The Special Court slammed the CBI over its handling of the Hindalco coal block allocation case, asking why wasn’t former prime minister Manmohan Singh questioned in the case.
Well, what is the answer expected from CBI in this regards ?
Guess, people remember former PM’s popular statement on the ‘Coalgate’ issue raised in the Parliament – ” Hazaaron Jawabon Se Acchi Hai Meri Khamoshi…”
Here is the cartoon drawn on lost files in Coalgate case where the PM kept silent against the acquisitions of the opposition. 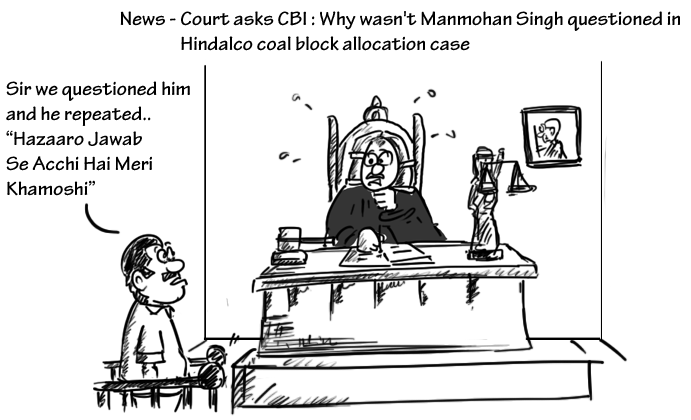 Prime Minister Manmohan Singh said that he was not above the law of the land and that CBI can ask him anything on coal scam and that he had nothing to hide. The opposition demanded his interrogation and resignation as he held direct charge of the Coal Ministry when  two coal blocks  in Odisha were assigned to  a firm owned by industrialist Kumar Mangalam Birla. Interestingly, the CBI, is ideally considered Govt’s pet. 🙂

Italian businessman Ottavio Quattrocchi, a suspect in the Bofors scam,that gave Congress real tough time for decades, has died of a heart attack in Milan.in 2011, CBI had dropped the cases against him declaring lack of evidence however the former CBI chief ,Joginder Singh,claimed the investigating body was in tremendous pressure  from the government while probing the bofors scam. Quattrocchi allegedly acted as a middleman in the scam and his closeness to the Gandhi family and success in evading trial in India have long raised questions on whether he was shielded by the Congress.

Details on Ottavio Quattrocchi,bofors scam and Congress government’s alleged involvement in the scam.

While officially, he was no more threat to the Congress after CBI dropped the cases against him,still, the unofficial chance of knowing the exact truth of  Bofors Scam seem to have been buried with the  death of Quattrocchi.

Govt can use CBI and put one in jail says Mulayam Singh  and probably that is the only reason he yells out poison against Congress and yet never leaves UPA !  😉

Mr U.S.Mishra,former CBI director accused pressure from government particularly while he was handling former Uttar Pradesh CM,Maywati’s,disproportionate assets case.As expected the government has denied any such allegations and has blamed it on BJP which was in the government at the time when Mr Mishra was the director.BJP on the otherhand says it is the Congress government which controls the CBI(Central Bureau Of Investigation) and uses it against political opponents and to keep allies in check.

YSR Congress Party with 17 MLAs and 2 MPs and headed by Jagan Mohan Reddy who is not in good terms with Congress after CBI has arrested him on charges of  disproportionate assets case has decided to support UPA candidate Pranab Mukherjee !

Though the party has declared their decision in favour of national interest and above politics and tered abstaining from voting for Presidential Election as against ethics. But, as they say, in politics favors are bond to be returned with counter-favors,it is likely that after the Presidential Election things will start easing out for Jagan for  his loyalty and support to the ruling UPA government’s Candidate.

Team Anna member, Arvind Kejriwal says not the CBI but an independent body should investigate coal scam as CBI would surely give Prime Minister,Manmohan Singh, a clean chit.