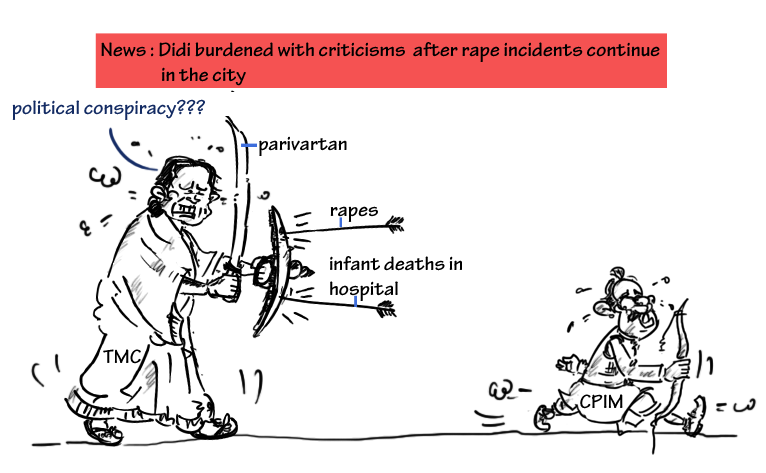 In yet another shocking rape incident in West Bengal a junior doctor has been accused of raping a patient who is hearing impared.The incident took place allegedly in Bankura Medical College in Bengal.

The junior doctor accused for raping hearing-impaired girl in Bankura Medical College has been arrested. Victim’s mother explained she had taken the daughter to the hospital after complains of chest plain and the doctor took her inside a room while asking mother to wait. After 2 hours when she could not wait anymore , she barged into the room where she found her daughter in naked state. The daughter then explained the incident in sign-language to her mother following which the FIR was lodged!

Previously two incidents of rape had shocked the nation , questioning the safety of women in Bengal. A 30-year-old woman was reported to have been raped by gang of robbers and prior to this incident , a 37-year-old mother of two was raped in a moving car. Initially, commenting this incident as got-up case, chief minister, Mamata Banerjee, faced criticisms,once the rape was proved. Gang rape by robbers too was stated as conspiracy against the government , by the CM.

Her apology on strikes promoted by her in the past, as opposition and request to people of Bengal not to entertain such strikes has also been contradictory and has been termed as hypocrisy.Mamata Banerjee has been under fire from opposition in the past for repeated child deaths in various hospitals of Bengal. Well, incidents of such kind are surely raising concerns however, Chief Minister’s blunt statement has been more concerning where she has been accusing incidents as conspiracy! It is time that will decide if these incidents are truly conspired but with the present change in the administration of state and the promising leadership of Mamata, Bengal hopes for a change for good. Since TMC won in Bengal and ‘Didi’ held the CM’s post she has also been noticed contradicting the UPA on number of issues.